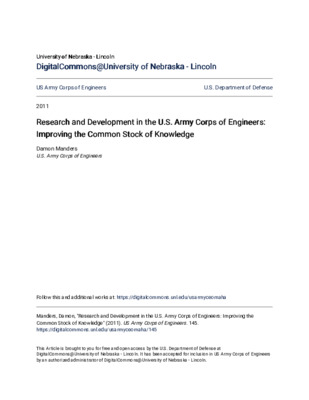 Research and Development in the U.S. Army Corps of Engineers: Improving the Common Stock of Knowledge

By Damon Manders
Get PDF (8 MB)

When Charles A. Camillo, the U.S. Army Corps of Engineers Mississippi Valley Division and U.S. Army Engineer Research and Development Center (ERDC) historian, approached me in 2007 about the possibility of working on a history of ERDC, I was excited about the potential of the project. He outlined a volume that would cover scientific research in engineering, hydraulics, computer science, topography, environmental science, and other technical fields. As one raised by an engineer in a town with one of the highest concentrations of physicists, engineers, and computer developers in the country — Huntsville, Alabama — and as someone who had written about computers and technology for years, I saw the project as an opportunity to bring my personal interests and experiences to bear on describing one of the most unique organizations in the country. Discussing the project, he envisioned not just an organizational yearbook that is all too often the tone of Corps of Engineers histories, but a narrative of all research and development activities from the origins of the Corps to the modern day that would place ERDC in historical context. It was a sweeping topic requiring integration of a vast amount of information in a brief time — a little more than a year to meet the objective of the anniversary of the formation of ERDC. The result is the present volume. Although it falls short of a comprehensive history, a task that would have taken many years and many volumes to complete, it briefly treats the many Corps research and development activities that led to the formation of ERDC in the context of U.S. engineering research, focusing primarily on the six fields that fall under ERDC: topography and photogrammetry, hydraulics and coastal engineering, geotechnology and structural engineering, construction research, cold regions research and engineering, environmental science, and information technology