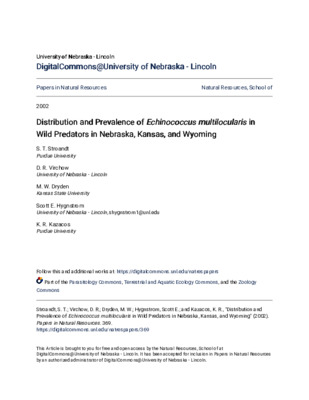 Distribution and Prevalence of \u3ci\u3eEchinococcus multilocularis\u3c/i\u3e in Wild Predators in Nebraska, Kansas, and Wyoming

To further determine the distribution and prevalence of Echinococcus multilocularis in the central United States, 245 wild canids (125 red foxes, 120 coyotes) and 33 bobcats were collected from Nebraska, Kansas, and Wyoming and examined for this parasite. Animals examined included 11 red foxes from the western panhandle of Nebraska; 5 red foxes and 30 coyotes from southern Nebraska; 56 red foxes and 1 coyote from northeastern Nebraska; 20 red foxes, 63 coyotes, and 13 bobcats from northern Kansas; 2 red foxes, 26 coyotes, and 20 bobcats from southern Kansas; and 31 red foxes from eastcentral Wyoming. Of these, 27 of 72 (37.5%) red foxes from Nebraska were positive, including 2 of 11 (18.2%) from the western panhandle and 25 of 56 (44.6%) from the northeastern part of the state. Mean intensity of infection was 282 worms (range, 1–5,150). New distribution records were established for E. multilocularis in western Nebraska as well as for several northeastern counties. These findings support previous estimates that the southernmost front of the parasite’s range extends along the southern border of Wyoming, eastward through central Nebraska and central Illinois into Indiana and Ohio

Topics: Parasitology, Terrestrial and Aquatic Ecology, Zoology
Publisher: DigitalCommons@University of Nebraska - Lincoln
Year: 2002
OAI identifier: oai:digitalcommons.unl.edu:natrespapers-1373
Provided by: DigitalCommons@University of Nebraska
Download PDF:
Sorry, we are unable to provide the full text but you may find it at the following location(s):