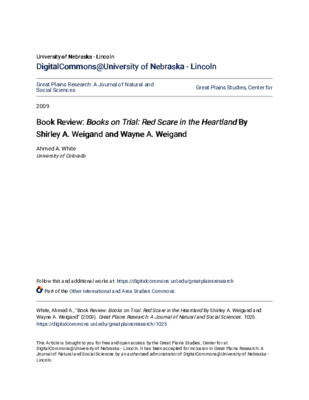 Book Review: \u3ci\u3eBooks on Trial: Red Scare in the Heartland\u3c/i\u3e By Shirley A. Weigand and Wayne A. Weigand

By Ahmed A. White

The subject of Shirley and Wayne Weigand’s Books on Trial is the prosecution of several Community Party members and their friends by authorities in Oklahoma City. The prosecutions, which began in 1940, entailed charges of “criminal syndicalism” based largely on the defendants’ connection to a Party-sponsored bookstore. Books on Trial recounts in detail the clumsy raids on the bookstore that set the prosecutions in motion; the rough treatment visited on the defendants by local authorities and citizens; the series of rigged trials resulting in the proprietor, his wife, and several others being convicted and sentenced to ten-year terms in prison plus significant monetary fines; and the campaign to exonerate the defendants, which eventually resulted in the convictions being overturned. Books on Trial shows how the main evidence of the defendants’ legal culpability was actually books from the store, some hardly radical in tone and most never read by police or prosecutors. As a straightforward narrative, this story is not only engaging but an effective reminder of the repressive tendencies that lurk within the modern liberal state. What really distinguishes the book from most scholarship on the history of civil liberties, however, is its attention to the human costs and local origins and consequences of this episode of repression