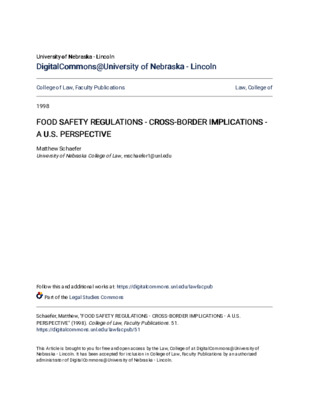 The United States and Canada are largely in agreement on food safety regulation issues. So, let me set up the debate between several parties not in the room. The debate at the time the Sanitary & Phytosanitary (SPS) Agreement was concluded was between the Office of the United States Trade Representative (USTR) and some consumer advocates, like Ralph Nader, and expresidential candidates, like Pat Buchanan. The claim by the USTR was that the SPS Agreement would allow an increase in trade by eliminating protectionist barriers under the guise of food safety standards while still allowing the United States to maintain its own high food safety standards, and, in fact, even increase those food safety standards, if they chose a higher level of protection than was being achieved by existing standards. The Buchanan/ Nader claim was that, regardless of what would happen with trade under the SPS Agreement, U.S. food safety standards would be threatened or diminished and that we would have to follow the standards of international bodies such as the Codex Alimentarius. I want to turn to the Hormones case to settle this debate, or at least give some initial guidance on it, as the agreement has operated in practice. But I thought first I would put the Hormones case and SPS Agreement in the broader context of U.S. trade interests in agricultural and food products and U.S. food regulation more generally