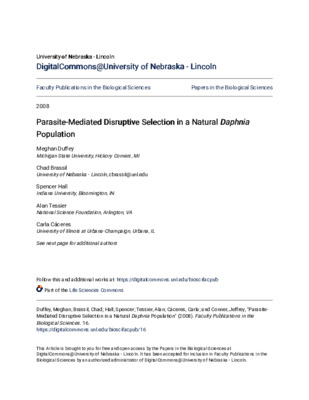 Background: A mismatch has emerged between models and data of host-parasite evolution. Theory readily predicts that parasites can promote host diversity through mechanisms such as disruptive selection. Yet, despite these predictions, empirical evidence for parasite-mediated increases in host diversity remains surprisingly scant. Results: Here, we document parasite-mediated disruptive selection on a natural Daphnia population during a parasite epidemic. The mean susceptibility of clones collected from the population before and after the epidemic did not differ, but clonal variance and broad-sense heritability of post-epidemic clones were significantly greater, indicating disruptive selection and rapid evolution. A maximum likelihood method that we developed for detecting selection on natural populations also suggests disruptive selection during the epidemic: the distribution of susceptibilities in the population shifted from unimodal prior to the epidemic to bimodal after the epidemic. Interestingly, this same bimodal distribution was retained after a generation of sexual reproduction. Conclusion: These results provide rare empirical support for parasite-driven increases in host genetic diversity, and suggest that this increase can occur rapidly