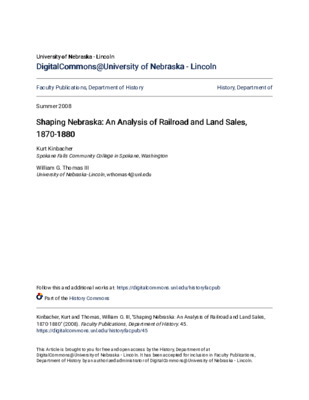 Shaping Nebraska: An Analysis of Railroad and Land Sales, 1870-1880

O n December 23, 1878, Ohio resident D. F. Vanniss wrote to George P. Cather, the Burlington and Missouri River Railroad\u27s land agent in Red Cloud, Nebraska. He asked Cather to buy for him the best 160 acres of R. R. Land in your county, and just to be clear he emphasized, I want it before somebody else gets it. Cather received many such breathless letters, urgent, pleading, and intense inquiries about the lands the railroad had for sale. Nearly all wanted to know the position of the all-important railroad. Almost all inquired about the availability of the all-important resource: water. Another buyer, an Illinois man, wrote Cather about a map of the B + M R. R. Lands which showed some full sections are unsold. He requested a particular section of land shown on the map with a stream nearby, and he asked Cather to confirm if there really was living water there. Still another man wrote to explain that he was considering pulling up stakes in Indiana and heading west. He predicted that some of his neighbors would follow him if he went, while others were too cowardly. He expressed great confidence in the country and was especially enthusiastic about the prospects of the railroad. I am well pleased that we are geting [sic] a rail road through our County, he wrote, and would like to know where it is going through. I think it will be the making of that County. The people here thout [sic] kind of curious that I would go and by [sic] land so far from the railroad