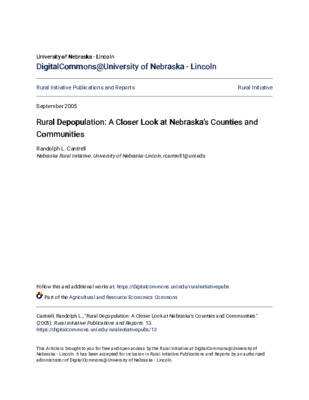 Rural Depopulation: A Closer Look at Nebraska’s Counties and Communities

There is no question about it; rural population loss and Metropolitan concentration continue to be important factors in shaping social and economic conditions in much of America’s Great Plains region. Despite widespread population increases throughout much of nonmetropolitan America during the 1990s, the rural Great Plains has remained an area of persistent decline (Johnson and Beale, 1998 and 2001). Declining populations have characterized many Great Plains counties since the early 1900s, and the trend has continued with few exceptions through the most recent census in 2000. In fact, for some Great Plains counties, the rate of population decline has actually accelerated in recent years. Declining rural populations and low population densities have been themes of recurring interest for demographers, sociologists, economists, policy analysts and journalists. The causal sequence leading to the current state of decline in the rural Great Plains is broadly accepted. Changes in agricultural technology have led to increased farm size and, thus, the number of farms and related businesses. Declining farm numbers have led to declining farm populations and out-migration of young people. Declining populations and outmigration result in reduced demand for goods and services, diminished job opportunities, and still more out-migration. Since the propensity to migrate tends to decline with age, out-migration from rural areas is highest among the young. Out-migration of young people results in declining birth rates and a residual elderly population, both of which further contribute to population decline (Johansen, 1993; Coffman and Anthan, 2005)