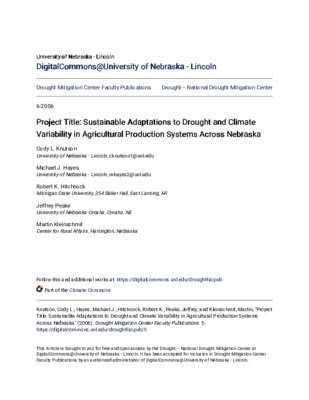 Drought is a normal part of Nebraska’s climate. It is also the leading cause of monetary disaster loss in the United States. FEMA (1995) has estimated that U.S. drought losses average $6-8 billion dollars per year. A majority of these losses are incurred in the agricultural sector. Nebraska’s losses alone topped $1.2 billion in 2002 (AP 2003). To enhance viable operations in this variable climate, many Nebraska farmers and ranchers have begun making the transition to agricultural practices that fall into the realm of sustainable agriculture. Sustainability has been increasingly stressed as essential for creating more resilient systems and reducing the effects of natural hazards (Anderson 1994, Mileti et al. 1995, Mehta 1997, United Nations 1997, Mileti 1999). However, little research has been done to understand the linkages between sustainable agriculture and drought management. This type of research is essential for enhancing agricultural adaptations to climate variability in Nebraska and in similar regions around the world. This study focused on investigating the linkages between sustainable agriculture and drought within the state of Nebraska. Specifically, this research investigated coping mechanisms adopted by sustainable producers to reduce the effects of short and long-term drought, their perceived feasibility and effectiveness, and producer perceptions of drought and forecast products that are needed to increase the resiliency of sustainable agricultural systems to drought. This information was collected through a mail-back survey and in-depth interviews of Nebraska’s sustainable agriculture producers whom have had recent experience dealing with one of the most severe droughts in Nebraska’s recorded history