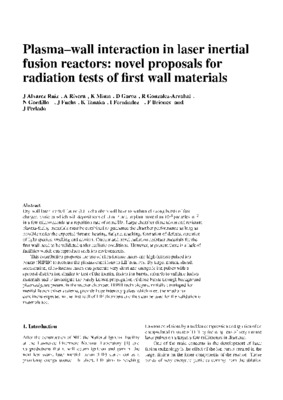 Dry-wall laser inertial fusion (LIF) chambers will have to withstand strong bursts of fast charged particles which will deposit tens of kJ m−2 and implant more than 1018 particles m−2 in a few microseconds at a repetition rate of some Hz. Large chamber dimensions and resistant plasma-facing materials must be combined to guarantee the chamber performance as long as possible under the expected threats: heating, fatigue, cracking, formation of defects, retention of light species, swelling and erosion. Current and novel radiation resistant materials for the first wall need to be validated under realistic conditions. However, at present there is a lack of facilities which can reproduce such ion environments. This contribution proposes the use of ultra-intense lasers and high-intense pulsed ion beams (HIPIB) to recreate the plasma conditions in LIF reactors. By target normal sheath acceleration, ultra-intense lasers can generate very short and energetic ion pulses with a spectral distribution similar to that of the inertial fusion ion bursts, suitable to validate fusion materials and to investigate the barely known propagation of those bursts through background plasmas/gases present in the reactor chamber. HIPIB technologies, initially developed for inertial fusion driver systems, provide huge intensity pulses which meet the irradiation conditions expected in the first wall of LIF chambers and thus can be used for the validation of materials too