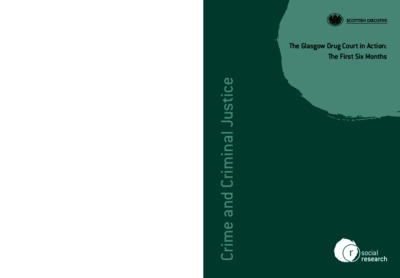 First paragraph: Drug Courts aim to reduce drug misuse and associated offending by offering treatment based options outwith the traditional court setting and have been established in a number of different jurisdictions with different populations of offenders. In October 2001 Scotland's first Drug Court was established in Glasgow Sheriff Court, operating under summary proceedings. The introduction of the new Drug Court followed the report of a Working Group for Piloting a Drug Court in Glasgow (thereafter referred to as the Working Group) which concluded in May 2001 that the establishment and operation of a Drug Court in Glasgow was feasible within existing legislation. The objectives of the new Drug Court are to: - reduce the level of drug-related offending behaviour; - reduce or eliminate offenders' dependence on or propensity to use drugs; - and examine the viability and usefulness of a Drug Court in Scotland using existing legislation, and to demonstrate where legislative and practical improvements might be important. The proposed target group for the Drug Court is offenders aged 21 years or older of both sexes, in respect of whom there is an established relationship between a pattern of serious drug misuse and offending and whose drug misuse is susceptible to treatment. Offenders referred to the Drug Court must otherwise have been facing prosecution in the Sheriff Summary Court and should normally first appear before the summary court from custody