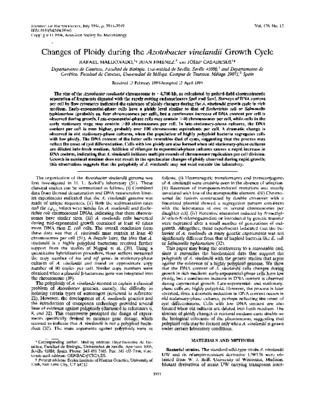 Changes of ploidy during the Azotobacter vinelandii growth cycle

The size of the Azotobacter vinelandii chromosome is approximately 4,700 kb, as calculated by pulsed-field electrophoretic separation of fragments digested with the rarely cutting endonucleases SpeI and SwaI. Surveys of DNA content per cell by flow cytometry indicated the existence of ploidy changes during the A. vinelandii growth cycle in rich medium. Early-exponential-phase cells have a ploidy level similar to that of Escherichia coli or Salmonella typhimurium (probably ca. four chromosomes per cell), but a continuous increase of DNA content per cell is observed during growth. Late-exponential-phase cells may contain > 40 chromosomes per cell, while cells in the early stationary stage may contain > 80 chromosomes per cell. In late-stationary-phase cultures, the DNA content per cell is even higher, probably over 100 chromosome equivalents per cell. A dramatic change is observed in old stationary-phase cultures, when the population of highly polyploid bacteria segregates cells with low ploidy. The DNA content of the latter cells resembles that of cysts, suggesting that the process may reflect the onset of cyst differentiation. Cells with low ploidy are also formed when old stationary-phase cultures are diluted into fresh medium. Addition of rifampin to exponential-phase cultures causes a rapid increase in DNA content, indicating that A. vinelandii initiates multiple rounds of chromosome replication per cell division. Growth in minimal medium does not result in the spectacular changes of ploidy observed during rapid growth; this observation suggests that the polyploidy of A. vinelandii may not exist outside the laboratory.This work was supported by grant PB89/0627 from the DGICYT of the Government of Spain. R.M. was a predoctoral fellow under the PFPI program of the Regional Government of Andalusia (Junta de Andalucía), Spain