Contains fulltext : 81852.pdf (publisher's version ) (Open Access)In chapter 2 is described that patients with tumours with non-cT4/pT4 skin involvement, but with dermal lymphatic involvement had a particularly dismal prognosis similar to that of patients with cT4/pT4 breast cancers. Therefore, this type of tumour should be included into the UICC/TNM cT4/pT4 category. In Chapter 3 is described that mitotic indices did not show better results compared to histological grade in respect to prognosis and therefore, changing of guidelines for treatment of breast cancer in favour of the mitotic indices in stead of histological grade is not recommended. In chapter 4 a review of the literature is presented concerning the prognostic impact of micro-metastases. In only one of eight studies, occult metastases were an independent risk factor for reduced survival. However, the outcome was dependent on the size of the nodal metastasis. In chapter 5 the pathology protocol which was used to examine the sentinel node (SN) was studied in four hospitals. In the hospital with the more intensified examination of the SN more patients were diagnosed with a positive SN, which resulted in more completion axillary lymph node dissections, but more positive non-SNs. Whether additional surgery and upstaging of a part of the breast cancer cases can offer better survival for the patients remains to be determined. In chapter 6-8 the findings of prophylactic mastectomy specimen in patients with a high risk for developing breast cancer are presented. The prevalence of high-risk lesions was high, equal in women with a BRCA1 or a BRCA2 mutation, but even higher in non-BRCA mutation carriers and was positively correlated with age older than 40 years. In chapter 9 the pathological examination of prophylactically removed breasts, with specimen radiography, is described in detail. This procedure made it possible to detect normally occult high-risk lesions as described in chapter 6-8.RU Radboud Universiteit Nijmegen, 5 juni 2009Promotores : Holland, R., Verbeek, A.L.M., Tjan-Heijnen, V.C.235 p 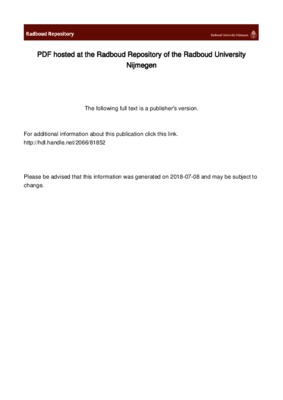