Contains fulltext : 76506.pdf (publisher's version ) (Open Access)This dissertation starts with a critical analysis of the scientific projects with signing chimpanzees, which were set up to see if chimpanzees could learn a human language. These projects consist of the research by the Gardners, the Fouts and the Terrace group. After the results of these projects are presented, the problems of setup, method and interpretation of which this type of research suffered, are discussed. Then a new study is presented in full detail about the recent signing behaviour of these chimpanzees. It was carried out by the author with the famous signing chimpanzees at the Chimpanzee and Human Communication Institute of Central Washington University, among whom the well-known chimpanzee Washoe. Four videotaped corpora from 1992 to 1999 consisting of 3,448 chimpanzee sign utterances were examined. These were analyzed with regard to the individual signs the chimpanzees used, the combinations of signs that they made, and the communicative intentions underlying each chimpanzee sign utterance. The results of this study were as follows. The chimpanzees predominantly used object and action signs. There was no evidence for semantic or syntactic structure in combinations of signs. Longer combinations showed repetition and stringing of object and action signs. The chimpanzees mostly signed with an acquisitive motivation. Requests for objects and actions were the predominant communicative intentions of the sign utterances, though naming and answering also occurred. This recent sign use shows multiple differences with (early) human language. The Discussion of the dissertation presents the implications of this study for the nature of the signing of apes and for ape language research in general. The chimpanzee sign use is also compared with the use of lexigrams by the bonobo Kanzi.KU-Nijmegen, 17 april 2003Promotor : Derksen, A.A. Co-promotor : Cock Buning, T. de603 p 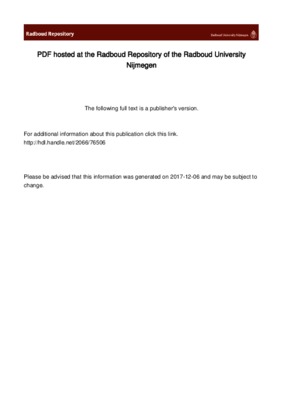