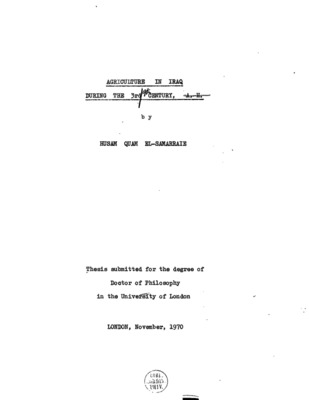 Agriculture in Iraq during the 3rd/9th century.

The following thesis, which consists of six chapters, is concerned with the history of agriculture in Iraq during the 3rd/9th century. The economy of the country in this century suffered from natural and political disasters, and it was also during this period, that the power of caliphate authority began to weaken. Chapter I deals with the geographical aspect of the country, its limits and its nature. It attempts to picture the system of its canalisation, levelling, survey and maintenance. Methods of irrigation both by water devices and weirs together with the drainage and reclamation of land are taken into consideration, as is the division of Iraq which was used by the existing government to supervise agricultural growth and tax collection. In the second chapter, aspects of tenure and production form the basis of discussion. An attempt is also made to collate the climate and conditions of work of cultivators and peasants together with a brief survey of life in the villages. This thesis pays attention, in Chapter III to the agricultural system, to the various methods of cultivation and the implements used. Floods, disease and pests are also considered, together with crops and their distribution. Chapter IV is devoted to the agricultural policy of the state. This is summarised under four headings and deals with the policy of irrigation, supervision of cultivation, reforms in tax assessment and collection and reform of the revenue calendar, and also the policy of iqta'. The fifth chapter deals with taxation, its various kinds, etc. and its assessment and method of collection, while the sixth chapter deals with agriculture as a source of revenue. It contains various accounts which represent the revenue of the period, and an attempt has been made to summarise the expenditure of the central government and the fluctuations which it caused in the revenue. No separate survey of the sources on which this thesis was based has been made as these have been the subject of a number of extensive studies (cf. Bibliography; Barthold, Duri, Gibb, Lewis, Rosenthal and Wellhausen)