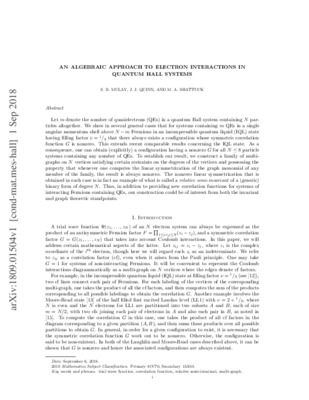 An Algebraic Approach to Electron Interactions in Quantum Hall Systems

Let $m$ denote the number of quasielectrons (QEs) in a quantum Hall system containing $N$ particles altogether. We show in several general cases that for systems containing $m$ QEs in a single angular momentum shell above $N-m$ Fermions in an incompressible quantum liquid (IQL) state having filling factor $\nu=\frac{1}{3}$ that there always exists a configuration whose symmetric correlation function $G$ is nonzero. This extends recent comparable results concerning the IQL state. As a consequence, one can obtain (explicitly) a configuration having a nonzero $G$ for all $N=8$ particle systems containing any number of QEs. To establish our result, we construct a family of multi-graphs on $N$ vertices satisfying certain restraints on the degrees of the vertices and possessing the property that whenever one computes the linear symmetrization of the graph monomial of any member of the family, the result is always nonzero. The nonzero linear symmetrization that is obtained in each case is in fact an example of what is called a relative semi-invariant of a (generic) binary form of degree $N$. Thus, in addition to providing new correlation functions for systems of interacting Fermions containing QEs, our construction could be of interest from both the invariant and graph theoretic standpoints.Comment: arXiv admin note: text overlap with arXiv:1808.1028