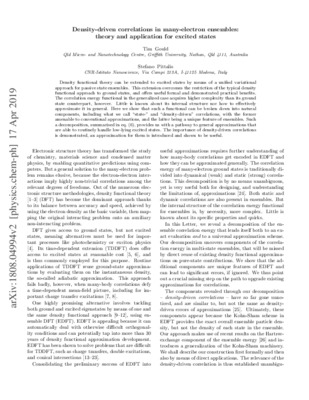 By Tim Gould and Stefano Pittalis
Get PDF (482 KB)

Density functional theory can be extended to excited states by means of a unified variational approach for passive state ensembles. This extension overcomes the restriction of the typical density functional approach to ground states, and offers useful formal and demonstrated practical benefits. The correlation energy functional in the generalized case acquires higher complexity than its ground state counterpart, however. Little is known about its internal structure nor how to effectively approximate it in general. Here we show that such a functional can be broken down into natural components, including what we call "state-" and "density-driven" correlations, with the former amenable to conventional approximations, and the latter being a unique feature of ensembles. Such a decomposition, summarised in eq. (6), provides us with a pathway to general approximations that are able to routinely handle low-lying excited states. The importance of density-driven correlations is demonstrated, an approximation for them is introduced and shown to be useful