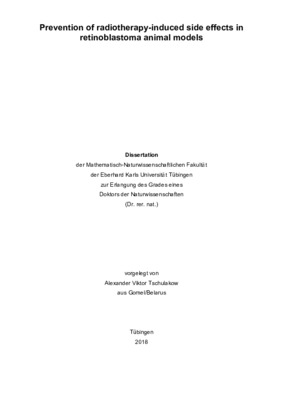 Prevention of radiotherapy-induced side effects in retinoblastoma animal models

Retinoblastoma is the most common intraocular malignancy of infancy which is thought to originate from progenitor cells of the developing retina. The modern therapeutic approaches for retinoblastoma treatment including radiotherapy have very high success rates if the tumour is diagnosed at an early time point. But these therapies, especially radiotherapy, have side effects such as damage to healthy tissues and increasing the risk of induction of secondary tumours. As the radiotherapy has to be performed in a very young age and the risk of the therapy's side effects persist over lifetime, the quality of the patients' lives is strongly impaired. The risk of developing secondary tumours after radiotherapy is particularly high for patients with a family history of retinoblastoma, which leads to a deterioration in the quality of these patients’ lives. In this context, the aim of our project was to analyse a new option for the prevention of side effects of radiotherapy of the retinoblastoma through the use of the radioprotector ortho-phospho-L-tyrosine (pTyr). Three main questions had to be answered: 1. Is there a relevant retinoblastoma-mouse-model which can be used for radiotherapy? 2. Can the application of pTyr protect tissues that are damaged by irradiation during radiotherapy and prevent the induction of secondary tumours? 3. Does the application of pTyr interfere with the radiotherapy? To answer question 1., the retinoblastoma mouse models described in the literature were analysed. Since none of them fully met our requirements, we decided to establish a new retinoblastoma-xenograft-mouse model by performing intravitreal injections of human Y79 cells in immunodeficient nude mice. The growth of the xenograft tumours in the eyes was monitored in vivo by scanning laser ophthalmoscopy (SLO) and optical coherence tomography (OCT). These results were compared to the results of the corresponding histological analysis. The in vivo and histological results showed a good correlation. The xenograft-tumours in the mouse-model showed very similar growth, histological and ultrastructural characteristics to Rb patients’ tumours and therefore our model can be used for the study of retinoblastoma. To answer the second question, Rb+/- mice as a model for patients who have defects in the homologue human RB1 gene were used. These patients have a higher risk of developing a retinoblastoma and other tumours like sarcomas, additionally, they are prone to radiotherapy-induced tumours. The animals were irradiated in a retinoblastoma radiotherapy-like procedure with and without a pTyr pre-treatment (100 mg/kg body weight, 16 hours before irradiation). A bleaching of the hair coat in the irradiated area started five weeks after irradiation in the animals which were not treated with pTyr. However, in the pTyr pre-treated animals the bleaching started later, about eight weeks after irradiation, and was significantly weaker. Importantly our in vivo (OCT) as well as our histological results have shown that pTyr protects the retina, which is a radiosensitive tissue, against the radiation-induced damage: the irradiation induced degenerative changes in the retina, such as thickness reduction, and loss of photoreceptors were significantly higher in the non-pTyr pretreated animals as compared to the pTyr-treated ones three, six and nine months after irradiation. No induced tumours or distant metastasis were found for any of the analysed mice. Since it is known that in retinoblastoma patients induced tumours are mostly diagnosed some 30 years after radiotherapy, the maximum lifespan of 16 months of our mice might be too short for the side effects to appear. Finally, in order to check if the application of pTyr would interfere with radiotherapy, the ability of pTyr to protect Y79 cells in vitro and in vivo was tested. For the in vitro testing Y 79 cell cultures were irradiated with and without pTyr pretreatment and their survival was analysed using different “limited dilution assays”. No significant radioprotection of pTyr on Y79 cells was detected. For the in vivo analysis of the radioprotection of Y79 cells by pTyr, our new established nude mouse model was used for a radiotherapeutic experiment with and without pTyr pre-treatment. The radiotherapy was successful as 80% of the mice which were not pre-treated with pTyr, stayed tumour-free for at least nine months after radiotherapy. However, in all pTyr pretreated animals a retinoblastoma reappeared. It has become apparent, that pTyr is a potent radioprotector for Y79- xenografts in contrast to Y79 cell cultures. This makes pTyr contraindicated for the radiotherapy of retinoblastoma. However, the radioprotective abilities of pTyr might make it interesting for the radiotherapy of other cancers, especially those with p53 mutations