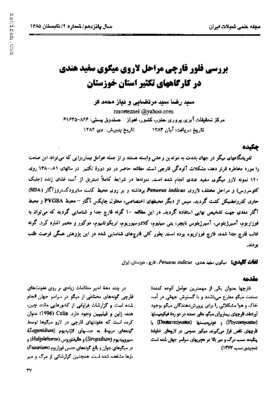 Shrimp hatcheries around the world continue to be heavily dependent of wild broodstock. One of the factors that could damage this industry is fungal infestation. Hence, we studied the fungal flora infesting shrimp larvae in hatcheries of Khouzestan Province, south Iran. The study covered two reproduction periods 2001=2002 and totally 140 specimens were collected from 2 hatcheries under Thailand and Philippine management systems. Samples were obtained in completely sterile condition from water, live food and different stages of shrimp larvae P. indices. The samples were cultured on SDA, PYGA, PYGSA and similar media. We diagnosed ten fungal species including Cladosporium sp, Pencillium, Trichothesium sp., Aspergilus sp. A. niger, Rhizopus, Mucor and Fusarium, the last being the most abundant fungus. We found that the contaminating fungal species were all opportunistic