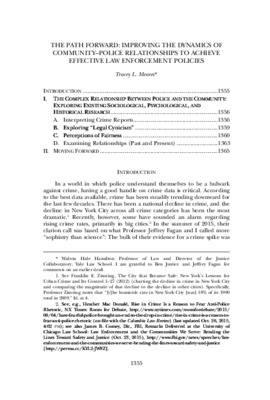 In a world in which police understand themselves to be a bulwark against crime, having a good handle on crime data is critical. According to the best data available, crime has been steadily trending downward for the last few decades. There has been a national decline in crime, and the decline in New York City across all crime categories has been the most dramatic. Recently, however, some have sounded an alarm regarding rising crime rates, primarily in big cities. In the summer of 2015, their clarion call was based on what Professor Jeffrey Fagan and I called more “sophistry than science”: The bulk of their evidence for a crime spike was pinned on a comparison of percentage increases over the last year. Percentage increases do not mean much when absolute numbers are small, and only two data points do not make a trend. The point of identifying a trend is to make a claim about the general direction of a set of data, so one needs more than two points in order to say something meaningful about the direction of data over time. In 2017, crime still trends downward in many cities, but there is also data that indicate some troubling trends. In a handful of cities, crime—especially violent crime— is going up. Cities with notable increases over the last two years include Baltimore, Chicago, and Washington, D.C