Prokofiev, Oistrakh, and the flute sonata arranged for violin

Access to accompanying materials permanently restricted.Sergey Prokofiev’s second violin sonata contrasts many of his works, because of its different medium, compositional goals, and the life circumstances of the composer during which it was written. This violin sonata was originally composed as Flute Sonata in D Op. 94. Prokofiev collaborated with David Oistrakh for a violin arrangement. They worked together to incorporate violin techniques such as double stops, pizzicato, and harmonics. At the time of writing, Prokofiev was inspired to write a sonata with a “classical, clear, transparent sonority.” Prokofiev achieved this, particularly in the first movement, through writing lyrical melodies and choosing sonata-allegro form. This paper looks at the historical background of the sonata, the collaboration between Prokofiev and David Oistrakh, the differences between the two versions, and analysis of the first movement.School of MusicThesis (M.M. 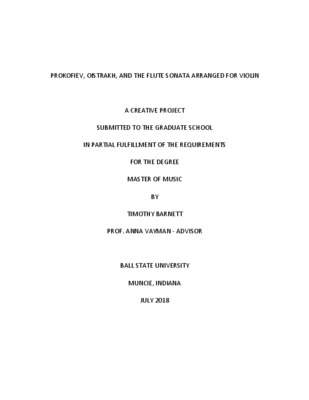 This paper was published in Cardinal Scholar.