The mating systems of pinnipeds and marine iguanas: convergent evolution of polygyny

Trillmich F, Trillmich KGK. The mating systems of pinnipeds and marine iguanas: convergent evolution of polygyny. Biological Journal of the Linnean Society. 1984;21:209-216.The convergent polygynous mating systems of marine iguanas and otariid pinnipeds depend on the existence of large female aggregations. These can build up where abundant marine food resources occur around oceanic islands which harbour fewer predators than continental areas. For marine iguanas distribution of food resources appears to determine the location of colonies, while for pinnipeds habitat choice is more decisive. In marine iguanas females benefit from gregariousness through reduced predation risk and social thermoregulation. In pinnipeds, sea lions may derive thermoregulatory benefits from gregariousness, while fur seals appear to be largely non-gregarious. In both groups males defend territories in areas of high female density. Large sexual size dimorphism presumably evolved in response to strong selection for high fighting potential of males. The capability to fast for prolonged periods of territory tenure is considered a secondary benefit of large male size, but not the driving force behind its evolution. We hypothesize that marginal males, through continuous sexual harassment of females that stay outside territories, have exerted pressure towards the evolution of female gregariousness 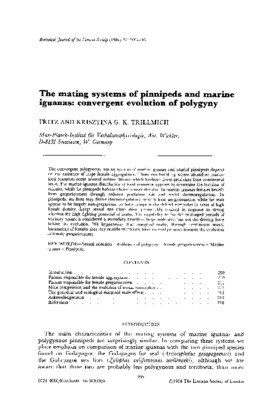