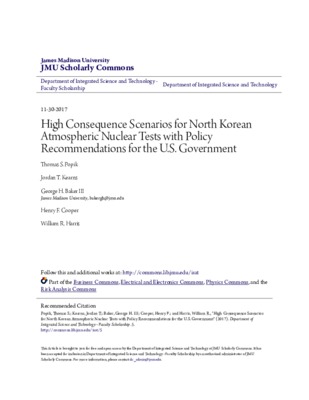 The government of North Korea has declared high-altitude EMP-capability to be a “strategic goal” and has also threatened an atmospheric test of a hydrogen bomb. Atmospheric nuclear tests have the potential to cripple satellites and the undersea cable networks critical to communication, and navigation necessary for trans-Pacific trade among the U.S., China, and other nations. When a nuclear warhead is detonated at high altitude, a series of electromagnetic pulses radiate downward within the line of sight of the blast. These pulses can disable equipment with miniature electronics and long conductors. Electric grid controls and transmission systems are especially vulnerable. Intense X-rays and free electrons caused by high-altitude nuclear tests can also disable satellites over large regions of space. After the 1962 Starfish Prime test of EMP effects by the U.S, numerous satellites failed. Based on past missile tests, calculated delivery ranges, EMP coverage areas, and geography, Resilient Societies developed five scenarios for North Korean atmospheric tests. Possible sites for EMP tests include the South Pacific Ocean northeast of French Polynesia, Johnson Atoll southwest of Hawaii, and vicinity of the U.S. territory of Guam. Missile trajectories for all three of these EMP test scenarios overfly populated areas. Missile navigation or nuclear device fuzing errors could place the populations of Japan, Guam, and Hawaii are at risk. All potential EMP test locations could cause disruption to international satellite and undersea cable communications networks. North Korea should not be permitted to conduct an atmospheric nuclear tests since EMP effects on large networks necessary for electric power and international data sharing could have serious worldwide consequences due to the importance of Asia and the Pacific region to the global economy. In the regrettable event that North Korea chooses to conduct atmospheric nuclear tests, U.S. and allied monitoring of EMP effects will be helpful