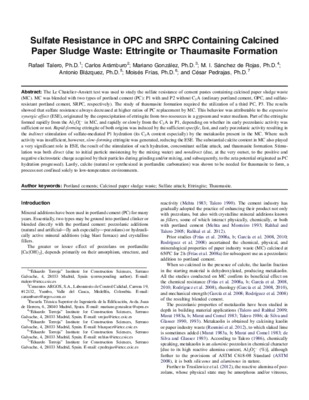 The Le Chatelier-Anstett test was used to study the sulfate resistance of cement pastes containing calcined paper sludge waste (MC). MC was blended with two types of portland cement (PC): P1 with and P2 without C3AC3A (ordinary portland cement, OPC, and sulfate-resistant portland cement, SRPC, respectively). The study of thaumasite formation required the utilization of a third PC, P3. The results showed that sulfate resistance always decreased at higher ratios of PC replacement by MC. This behavior was attributable to the expansive synergic effect (ESE), originated by the coprecipitation of ettringite from two resources in a gypsum and water medium. Part of the ettringite formed rapidly from the Al2Or?3Al2O3r? in MC, and rapidly or slowly from the C3AC3A in P1, depending on whether its early pozzolanic activity was sufficient or not. Rapid-forming ettringite of both origins was induced by the sufficient specific, fast, and early pozzolanic activity resulting in the indirect stimulation of sulfate-mediated P1 hydration (its C3AC3A content especially) by the metakaolin present in the MC. Where such activity was insufficient, however, slow-forming ettringite was generated, reducing the ESE. The substantial calcite content in MC also played a very significant role in ESE, the result of the stimulation of such hydration, concomitant sulfate attack, and thaumasite formation. Stimulation was both direct (due to initial particle moistening by the mixing water) and nondirect (due, at the very outset, to the positive and negative electrostatic charge acquired by their particles during grinding and/or mixing, and subsequently, to the zeta potential originated as PC hydration progressed). Lastly, calcite (natural or synthesized in portlandite carbonation) was shown to be needed for thaumasite to form, a process not confined solely to low-temperature environments