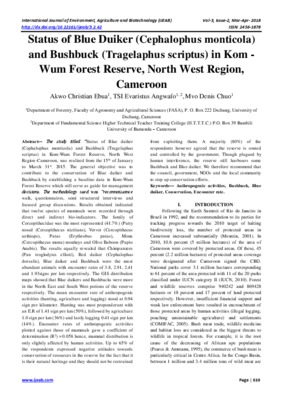 The study titled “Status of Blue duiker (Cephalophus monticola) and Bushbuck (Tragelaphus scriptus) in Kom-Wum Forest Reserve, North West Region-Cameroon, was realized from the 15th of January to March 31st, 2015. The general objective was to contribute to the conservation of Blue duiker and Bushbuck by establishing a baseline data in Kom-Wum Forest Reserve which will serve as guide for management decisions. The methodology used was “reconnaissance walk, questionnaires, semi structured interviews and focused group discussions. Results obtained indicated that twelve species of mammals were recorded through direct and indirect bio-indicators. The family of Cercopithecidae was the most represented (41.7%) (Putty nosed (Cercopithecus nictitans), Vervet (Cercopithecus aethiops), Patas (Erythrobus patas), Mona (Cercopithecus mona) monkeys and Olive Baboon (Papio Anubis). The results equally revealed that Chimpanzees (Pan troglodytes ellioti), Red duiker (Cephalophus dorsalis), Blue duiker and Bushbuck were the most abundant animals with encounter rates of 3.8, 2.91, 2.41 and 1.93signs per km respectively. The GIS distribution maps showed that Blue duikers and Bushbucks were more in the North East and South West potions of the reserve respectively. The mean encounter rate of anthropogenic activities (hunting, agriculture and logging) stood at 0.94 sign per kilometer. Hunting was most preponderant with an E.R of 1.41 sign per km (50%), followed by agriculture 1.0 sign per km (36%) and lastly logging 0.41 sign per km (14%). Encounter rates of anthropogenic activities plotted against those of mammals gave a coefficient of determination (R2) =0.058 hence, mammal distribution is only slightly affected by human activities. Up to 65% of the respondents expressed negative attitudes towards conservation of resources in the reserve for the fact that it is their natural heritage and they should not be restrained from exploiting them. A majority (80%) of the respondents however agreed that the reserve is owned and controlled by the government. Though plagued by human interference, the reserve still harbours some Bushbuck and Blue duiker. We therefore recommend that the council, government, NGOs and the local community to step up conservation efforts