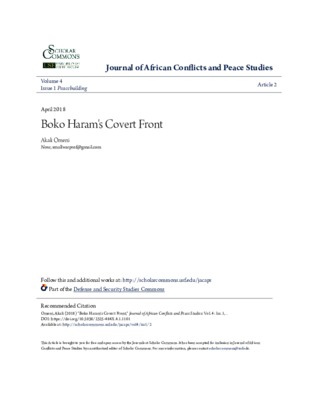 Waging a highly irregular war — an insurgency — in Northeast Nigeria since September 2010, Boko Haram over the years has escalated as a threat form. By 2014, this threat extended beyond Nigeria’s borders; and by 2017, thousands of people had become casualties of the conflict; with millions displaced in Northeast Nigeria. Boko Haram however did not necessarily achieve this threat escalation by fighting and defeating the Nigerian military on the battlefield. A large part of Boko Haram’s calculations, rather, have been focused on its covert front and on war avoidance altogether. Indeed, covert tactics have been the main vehicle by which Boko haram has projected its threat to the Northwest and Central belt of Nigeria, as well as beyond its borders to Cameroon, Chad and Niger. Using unconventional tactics and focusing mostly on soft targets within the civilian space, Boko Haram in adopting guerrilla tactics and showing proficiency in war avoidance, has effectively taken away the Nigerian military’s traditional advantages. This approach moreover, has ensured that the insurgency has endured even as the Nigerian Army has been deploying increasing numbers of task force battalions, as a deterrent to both covert and overt attacks. Consequently, whereas overt attempts to hold and contest territory have markedly decreased since 2015 and Boko Haram continues to find relevance in its covert attacks. This paper interrogates Boko Haram’s covert front and discusses its features, impact and implications for the Nigerian military’s approach to tactical warfare in the Northeast