DsbA proteins, the primary catalysts of protein disulfide bond formation, are known to affect virulence and penicillin resistance in Gram-negative bacteria. We identified a putative DsbA homologue in the Gram-positive pathogen Staphylococcus aureus that was able to restore the motility phenotype of an Escherichia coli dsbA mutant and thus demonstrated a functional thiol oxidoreductase activity. The staphylococcal DsbA (SaDsbA) had a strong oxidative redox potential of −131mV. The persistence of the protein throughout the growth cycle despite its predominant transcription during exponential growth phase suggested a rather long half-life for the SaDsbA. SaDsbA was found to be a membrane localised lipoprotein, supporting a role in disulfide bond formation. But so far, neither in vitro nor in vivo phenotype could be identified in a staphylococcal dsbA mutant, leaving its physiological role unknown. The inability of SaDsbA to interact with the E. coli DsbB and the lack of an apparent staphylococcal DsbB homologue suggest an alternative re-oxidation pathway for the SaDsb 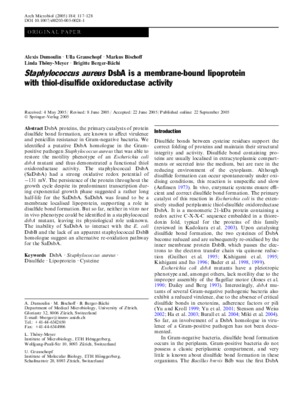