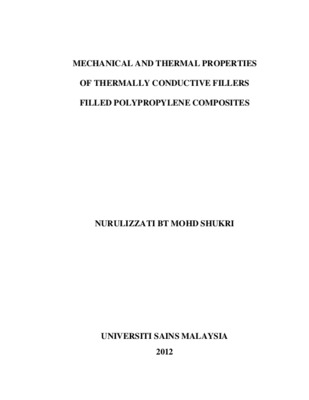 The current study was carried out to investigate the effect of various fillers for example (such as) carbon nanotube (MWNT), synthetic diamond (SD), boron nitride (BN) and copper (Cu) on the properties of polypropylene (PP) composites. This composite was compounded using two roll mill mixing method and the filler content was loaded from 1 to 4 volume %. It was observed that the PP/SD, PP/BN and PP/Cu exhibited maximum tensile strength at 2 volume % and a reduction trend can be observed after 2 volume %. Scanning electron microscopy (SEM) was used to examine the fractured structure of the composites, and it was observed that agglomeration increased as the filler loading increased. Thermal conductivity, thermal stability, coefficient of thermalexpansion (CTE) and storage modulus of the composites were improved by addition of fillers in PP. Among these four fillers, MWNT showed greater potential in improving thermal properties of PP composites. In the second series, the effects of hybrid filler (MWNT/SD and MWNT/BN) in PP composites were studied. The results showed that the thermal conductivity, thermal stability, coefficient of thermal expansion and storage modulus of the hybrid composites were improved if compared to single fillers composites. However, the tensile and flexural properties of hybrid composites were noted to be lower than the single composites. In the third series, the improvements in the compounding were carried out by using two compounding methods; planetary ball mill and two roll mill. Enhancement in strength, stiffness, thermal conductivity and storage modulus of the composites has been observed in this system. Nevertheless, the thermal stability was found to be reduced as the two compounding methods were used in the fabrication process