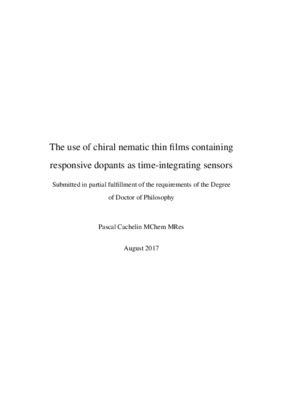 PhDChiral nematic thin films containing responsive dopants have previously been considered as sensors and dosimeters. Some systems have been developed, with mixed results. The investigation so far has been piecemeal, with little attention paid towards understanding the properties that govern how these sensors operate. By carefully considering these properties, we believe that it is possible to predict the effectiveness of a sensor, and therefore a framework can be established which would allow only sensors with significant potential to be investigated. The applications of a variety of chiral nematic thin films incorporating responsive dopants is modelled and then investigated experimentally. The systems chosen for investigation were selected using the criteria of commercial potential and synthetic simplicity. In each case it was found that the behaviour of these systems could be predicted well from simple experimental data. The systems chosen for investigation were judged on the basis of two key criteria: They must be systems that deal with a target that is of commercial interest, so that performance expectations for ‘real-life’ applications can be given at the start of the research process. They must be manufactured only using materials and processes that are commercially available. These limitations were chosen to highlight the conditions under which such a model would be expected to operate. In this work, a successful model that predicts sensors behaviour from basic experimental information was developed and shown to match well with experimental results. In the process, three new sensing systems were developed, all with potential commercial significance. Additionally, some observations regarding the methods of operation which are most likely to result in high sensitivity and low cross-sensitivity have been made