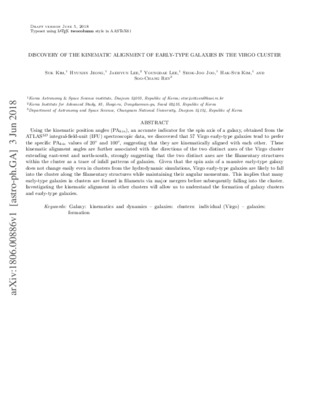 Using the kinematic position angles (PA_kin), an accurate indicator for the spin axis of a galaxy, obtained from the ATLAS3D integral-field-unit (IFU) spectroscopic data, we discovered that 57 Virgo early-type galaxies tend to prefer the specific PA_kin values of 20 degree and 100 degree, suggesting that they are kinematically aligned with each other. These kinematic alignment angles are further associated with the directions of the two distinct axes of the Virgo cluster extending east-west and north-south, strongly suggesting that the two distinct axes are the filamentary structures within the cluster as a trace of infall patterns of galaxies. Given that the spin axis of a massive early-type galaxy does not change easily even in clusters from the hydrodynamic simulations, Virgo early-type galaxies are likely to fall into the cluster along the filamentary structures while maintaining their angular momentum. This implies that many early-type galaxies in clusters are formed in filaments via major mergers before subsequently falling into the cluster. Investigating the kinematic alignment in other clusters will allow us to understand the formation of galaxy clusters and early-type galaxies.Comment: Accepted at ApJL, 6pages, 3 figur