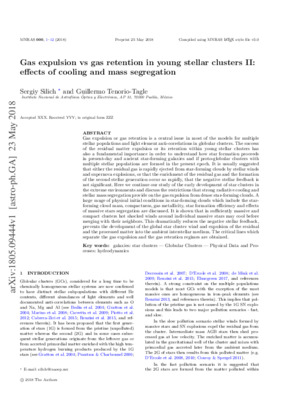 Gas expulsion or gas retention is a central issue in most of the models for multiple stellar populations and light element anti-correlations in globular clusters. The success of the residual matter expulsion or its retention within young stellar clusters has also a fundamental importance in order to understand how star formation proceeds in present-day and ancient star-forming galaxies and if proto-globular clusters with multiple stellar populations are formed in the present epoch. It is usually suggested that either the residual gas is rapidly ejected from star-forming clouds by stellar winds and supernova explosions, or that the enrichment of the residual gas and the formation of the second stellar generation occur so rapidly, that the negative stellar feedback is not significant. Here we continue our study of the early development of star clusters in the extreme environments and discuss the restrictions that strong radiative cooling and stellar mass segregation provide on the gas expulsion from dense star-forming clouds. A large range of physical initial conditions in star-forming clouds which include the star-forming cloud mass, compactness, gas metallicity, star formation efficiency and effects of massive stars segregation are discussed. It is shown that in sufficiently massive and compact clusters hot shocked winds around individual massive stars may cool before merging with their neighbors. This dramatically reduces the negative stellar feedback, prevents the development of the global star cluster wind and expulsion of the residual and the processed matter into the ambient interstellar medium. The critical lines which separate the gas expulsion and the gas retention regimes are obtained.Comment: 12 pages, 7 figures, accepted for publication in MNRA