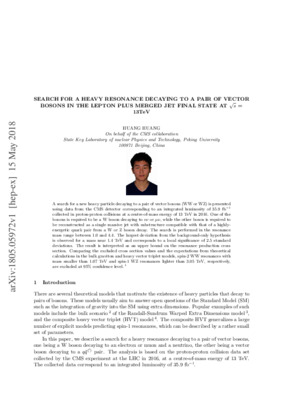 A search for a new heavy particle decaying to a pair of vector bosons (WW or WZ) is presented using data from the CMS detector corresponding to an integrated luminosity of 35.9/fb collected in proton-proton collisions at a centre-of-mass energy of 13 TeV in 2016. One of the bosons is required to be a W boson decaying to e{\nu} or {\mu}{\nu}, while the other boson is required to be reconstructed as a single massive jet with substructure compatible with that of a highly-energetic quark pair from a W or Z boson decay. The search is performed in the resonance mass range between 1.0 and 4.5 TeV. The largest deviation from the background-only hypothesis is observed for a mass near 1.4 TeV and corresponds to a local significance of 2.5 standard deviations. The result is interpreted as an upper bound on the resonance production cross section. Comparing the excluded cross section values and the expectations from theoretical calculations in the bulk graviton and heavy vector triplet models, spin-2 WW resonances with mass smaller than 1.07 TeV and spin-1 WZ resonances lighter than 3.05 TeV, respectively, are excluded at 95% confidence level.Comment: 53rd Rencontres de Moriond - EW 201