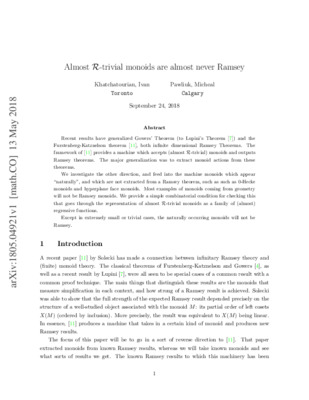 Recent results have generalized Gowers' Theorem (to Lupini's Theorem) and the Furstenberg-Katznelson theorem, both infinite dimensional Ramsey Theorems. The framework of arXiv:1611.06600 provides a machine which accepts (almost $\mathcal{R}$-trivial) monoids and outputs Ramsey theorems. The major generalization was to extract monoid actions from these theorems. We investigate the other direction, and feed into the machine monoids which appear "naturally", and which are not extracted from a Ramsey theorem, such as such as $0$-Hecke monoids and hyperplane face monoids. Most examples of monoids coming from geometry will not be Ramsey monoids. We provide a simple combinatorial condition for checking this that goes through the representation of almost $\mathcal{R}$-trivial monoids as a family of (almost) regressive functions. Except in extremely small or trivial cases, the naturally occurring monoids will not be Ramsey.Comment: 17 pages, 6 figure