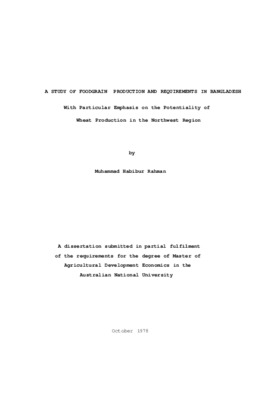 A study of foodgrain production and requirements in Bangladesh : with particular emphasis on the potentiality of wheat production in the northwest region

Bangladesh is one of the few countries of the world where the vast majority of people live at a very low level of absolute poverty. The situation is aggravated by shortage of foodgrains resulted from the growing population. In view of this chronic foodgrain shortage, the Government of Bangladesh has, since the late sixties, been trying to increase the domestic production of foodgrains by introducing High Yielding Varieties (HYV) of rice. The First Five Year Plan (1973-78) of Bangladesh spelled out that by the terminal year, 1978, the country would be made self-sufficient in foodgrain production with the help of HYV rice. However, the rate of adoption of HYV rice has been much slower than anticipated due to resource and socio-economic constraints. A review of the planned targets from the First Five-Year Plan reveals that by 1976-77, the actual production reached 84 percent of the target of that year. Furthermore rice production had not increased beyond that of the three years earlier. Consequently there were huge shortfalls varying from 1.5 to 2.9 million tons of foodgrains. These shortfalls were met by imports, about 90 percent of which were wheat. Thus although wheat comprises 1-2 percent of the total domestic production of grain,it comprises 15-20 percent of the total foodgrain consumption in Bangladesh. From the point of view of the balance of payments situation, therefore, it appears that although a minor crop, in many ways wheat may be a crop of crucial importance in the Bangladesh economy. This study therefore begins an investigation of the production potential of HYVs of wheat. HYVs of rice are not equally suitable in all areas and seasons in Bangladesh. In the northwest of Bangladesh the scarcity of water, low rainfall and the availability of fertile land in winter may make the cultivation of HYV wheat a more worthwhile development strategy. The main part of this study investigates the economics of growing Local Varieties (LV) and HYVs of wheat in an area of Rajshahi in the northwest of Bangladesh. A resource productivity analysis was accomplished. A Cobb-Douglas production function was fitted under a Multiple Regression Model to find out the productivity of individual resource inputs. It was assumed that the same production function is applicable for all the different sets of farms growing wheat. The production function analysis of the LV and the HYV wheat farms revealed that the use of modern inputs e.g. fertilizer, increases the yield of wheat both in the local variety (LV) and in the high yielding variety (HYV) of wheat. Even in the case of LV wheat, the use of fertilizer substantially increases yield. In the absence of rice data, the study could not make generalizations on the relative potentiality of HYVs of rice and wheat. Nevertheless the most recent data on wheat production in Bangladesh and the findings of the present study suggest that there is considerable scope to ease the food situation in the country by introducing HYVs of wheat in northwest Bangladesh. This single crop study was done on the basis of 1974-75 data. To effectively place the findings in a planning context, a similar study is required which would compare the results of wheat of the present study against a similar set of results from farms growing other crops

Topics: Grain Bangladesh, Wheat Bangladesh
Year: 2017
DOI identifier: 10.25911/5d739329cc133
OAI identifier: oai:openresearch-repository.anu.edu.au:1885/129619
Provided by: The Australian National University
Download PDF:
Sorry, we are unable to provide the full text but you may find it at the following location(s):