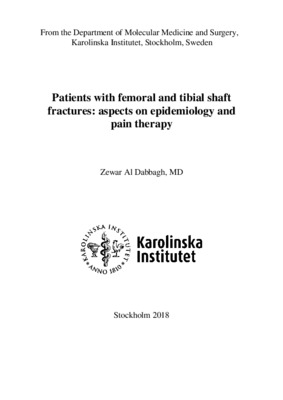 Patients with femoral and tibial shaft fractures : aspects on epidemiology and pain therapy

Background: Fractures of the tibial and femoral shafts are common injuries with outcomes depending on injury mechanism, fracture pattern, patient-specific data and treatment methods. Nationwide epidemiological data on these often serious injuries are sparse. Information on long-term therapy with opioids in these patients is lacking in the literature. Therefore, the aim of the present thesis was to study the incidence, mechanism of injury and treatment methods of patients with tibial and femoral shaft fractures. Soft tissue reconstructions and amputations after open tibial fractures in Sweden were also analyzed. Moreover, the long-term pattern of opioid prescriptions in patients after tibial and femoral shaft fractures was examined on a nationwide basis. Patients and methods : Data on all hospital admissions for tibial and femoral shaft fractures during 1998-2004 (study I-II) and for open tibial fractures during 1998-2010 (study III) were extracted from the Swedish National Hospital Discharge Register. Incidence rates (IR) per 100,000 person-years (pyr), mechanisms of injury, surgical interventions and amputation rates were analyzed. The Swedish Prescribed Drug Register was used to extract data on long-term opioid prescriptions for patients sustaining tibial (study IV) and femoral (study V) shaft fractures during 2005-2008. Age- and sex-matched control groups without the index fracture were gathered from the Total Population Register for comparisons. Results : Study I: 10,627 admissions for tibial shaft fractures corresponding to an annual IR of 17/100,000 pyr were identified. The number of hospital admissions declined by 12% during the study period with more reduction in male incidence. Most admissions were found in the age-groups 10-19 years in males and 50-59 years in females. Study II: 6,409 admissions for femoral shaft fractures were identified corresponding to an annual IR of 10/100,000 pyr. The total number of hospital admissions remained stable during 1998-2004. Most admissions were generated by females in the 80-89 years age-group and by males under the age of 10 years. Study III: Of 3,777 patients with open tibial fractures, 9% underwent soft tissue reconstructive surgery. The overall rate of amputation was 3.6%. The risk of amputation according to an adjusted analysis was increased in patients older than 70 years (OR 2.7) and in patients who underwent soft-tissue reconstructions (OR 3.1). Study IV: A total of 2,571 patients with isolated tibial shaft fractures were identified, of whom 25% filled prescriptions of strong opioids after the fracture. An adjusted analysis revealed that older patients (>=50 years) were more likely to end opioid prescriptions (HR 1.5). At six, 12 and 18 months after the fracture, 21%, 14% and 11% of the patients respectively, were still getting prescribed opioids. Study V: A total of 1,471 patients with isolated femoral shaft fractures were identified, of whom 61% received prescriptions of opioids (strong and/or weak) during a median follow-up of 20 months. In the age- and sex-matched control cohort without fracture (7,339 individuals), 25% had opioid prescriptions dispensed during the same period. Conclusions: Nationwide epidemiological data on patients with tibial and femoral shaft fractures can be used by healthcare providers to plan hospital beds, surgical interventions, risk preventions and centralization of more complicated injuries. The amputation rate after open tibial fractures is low. The risk of amputation is increased in older patients and if the reconstruction is delayed beyond 72 hours. A notable proportion of patients continue to receive prescribed opioids several months after femoral and tibial fractures. However, the risk of dose escalations seems to be small