Speaking Crisis in the Eurozone Debt Crisis: Exploring the Potential and Limits of Transformational Agonistic Conflict

Agonism as a political theory emphasizes the ontological aspect of conflict in human political interaction. This article aims to shed light on the political practice of agonism – and in doing so on its limits – by viewing 'crisis discourse' as an agonistic political practice. As my analysis of the Dutch Socialist Party and the Freedom Party’s speech in the European Sovereign Debt Crisis shows, crisis discourse aimed to (re)create a ‘people’ and to justify radical change in economic and social structures. Crisis discourse is employed to construct an 'other' that can be based on ethnic and nationalist terms and to justify retroactive application of the law and the stripping of Dutch citizens of their rights. This attention to crisis discourse as an agonistic political practice highlights an unease within agonism itself: where must the agonist accepts limits to the conflict and contestation she so values? The article starts with Chantal Mouffe's answer to this question - her insistence that legitimate conflict must always recognize the shared values of equality and liberty - and proceeds to show that Mouffe's view unnecessarily relies on a deliberative democratic desire for consensus. Other than Mouffe, I draw on Honig’s emphasis of perpetual contestation to propose that the issue of limits can be best answered by reference to the core of agonistic thought: the preservation of the struggle over political norms and processes. It is not shared values or even a shared political space that matters, but that the political space of the ‘people’ – however contested membership therein might be – remains a place that the 'other' can re-ente 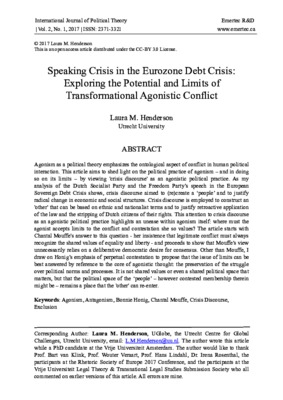