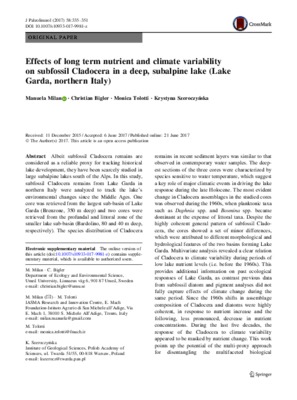 Albeit subfossil Cladocera remains are considered as a reliable proxy for tracking historical lake development, they have been scarcely studied in large subalpine lakes south of the Alps. In this study, subfossil Cladocera remains from Lake Garda in northern Italy were analyzed to track the lake’s environmental changes since the Middle Ages. One core was retrieved from the largest sub-basin of Lake Garda (Brenzone, 350 m deep) and two cores were retrieved from the profundal and littoral zone of the smaller lake sub-basin (Bardolino, 80 and 40 m deep, respectively). The species distribution of Cladocera remains in recent sediment layers was similar to that observed in contemporary water samples. The deepest sections of the three cores were characterized by species sensitive to water temperature, which suggest a key role of major climatic events in driving the lake response during the late Holocene. The most evident change in Cladocera assemblages in the studied cores was observed during the 1960s, when planktonic taxa such as Daphnia spp. and Bosmina spp. became dominant at the expense of littoral taxa. Despite the highly coherent general pattern of subfossil Cladocera, the cores showed a set of minor differences, which were attributed to different morphological and hydrological features of the two basins forming Lake Garda. Multivariate analysis revealed a clear relation of Cladocera to climate variability during periods of low lake nutrient levels (i.e. before the 1960s). This provides additional information on past ecological responses of Lake Garda, as contrast previous data from subfossil diatom and pigment analyses did not fully capture effects of climate change during the same period. Since the 1960s shifts in assemblage composition of Cladocera and diatoms were highly coherent, in response to nutrient increase and the following, less pronounced, decrease in nutrient concentrations. During the last five decades, the response of the Cladocera to climate variability appeared to be masked by nutrient change. This work points up the potential of the multi-proxy approach for disentangling the multifaceted biological responses to multiple environmental stressors in large and deep lake