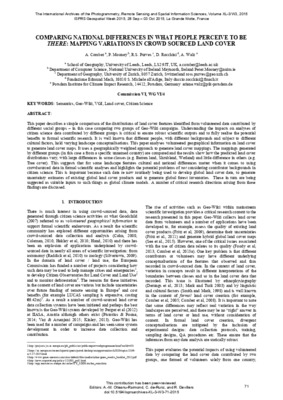 Comparing national differences in what the people perceive to be there: mapping variations in crowd sourced land cover

This paper describes a simple comparison of the distributions of land cover features identified from volunteered data contributed by different social groups – in this case comparing two groups of Geo-Wiki campaigns. Understanding the impacts on analyses of citizen science data contributed by different groups is critical to ensure robust scientific outputs and to fully realise the potential benefits to formal scientific research. It is well known that different people, with different backgrounds and subject to different cultural factors, hold varying landscape conceptualisations. This paper analyses volunteered geographical information on land cover to generate land cover maps. It uses a geographically weighted approach to generate land cover mappings. The mappings generated by different groups (in this case a from a specific unnamed country) are compared and the results show how the predicted land cover distributions vary, with large differences in some classes (e.g. Barren land, Shrubland, Wetland) and little difference in others (e.g. Tree cover). This suggests that for some landscape features cultural and national differences matter when it comes to using crowdsourced data in formal scientific analyses and highlights the potential problems of not considering contributor backgrounds in citizen science. This is important because such data re now routinely being used to develop global land cover data, to generate uncertainty estimates of existing global land cover products and to generate global forest inventories. These in turn are being suggested as suitable inputs to such things as global climate models. A number of critical research directions arising from these findings are discussed