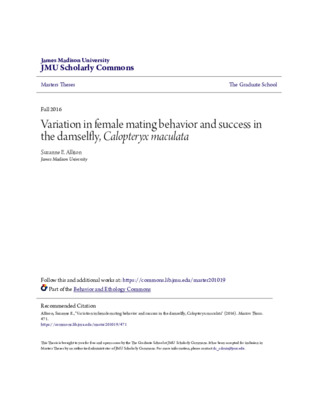 Variation in female mating behavior and success in the damselfly, Calopteryx maculata

Traditionally, the study of sexual selection has focused on the evolution of elaborate male traits and how they enhance the ability to out-compete other males directly (access to females) and indirectly (access to desirable territories or resources). Female trait studies have focused most on evolved preferences for male traits. While we know much about how sexual selection acts on males, there is a deficit of equivalent study on females. In insects, including damselflies, male size and pigmentation are positively correlated with fat reserves and immune abilities, and therefore with male competitive ability. Here, we show that phenotypic variation that has been well-documented in males of the Ebony jewelwing damselfly, Calopteryx maculata, is also present in females of the species. We measured female mating success and behavior of C. maculata at Smith Creek in Rockingham County, Virginia. Males were marked with multiple colors of fluorescent powder that was transferred to females when mating. Uniquely-numbered females were digitally scanned and repeatedly observed throughout the summer. We determined that there is significant variation in female mating frequency, wing pigmentation, size, and shape. The study of trait variation within females, and thus the opportunity for selection to act on those traits, is essential in understanding how evolution on females may have contributed to sex differences, and may change the way we think about the role of females in sexual selection