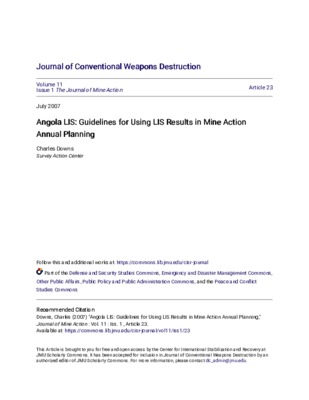 The Survey Action Center and Comissâo Nacional Intersectorial de Desminagem e Assistência Humanitária carried out the Angola Landmine Impact Survey. In July 2006, SAC sent the author on the first of three planned missions to Angola as Technical Advisor for the completion of the LIS. This article explains the Provisional Provincial Reports, which contain a section of guidelines on the use of LIS results for operational planning. The National Mine Action Strategy for Angola was developed based on interim LIS results, and the detailed data supporting those results are made freely available to all interested parties