Visa liberalisation and economic implication for the Western Balkans

When in April, 2007, western Balkan countries started the facilitation of the visa agreement that will allow them extremely simplified procedures for visa application in order to enter EU countries, many of the citizens of this region that historically has been isolated were skeptical this will really happen. This article analyses in detail the process of visa liberalization for the western Balkan countries and argues that visa facilitation is shown to be very useful despite the fact that only one country – known as “ghettoized” – the Republic of Kosovo. This state that is recognized internationally by 75 nations, of which 22 are EU, has remained the last Balkan country whose citizens still cannot travel freely in the EU. An important role in visa liberalization are the agreements of re-acceptance which are signed between the countries of the region and the European Commission that asks said countries to turn back all their citizens which are found illegally in the EU. Among others, this article provides an objective analysis in terms of the political implications of visa liberalization and free movement inside the European Union. The authors argue that traveling facilitations have become useful for citizens of particular countries whose aims are for positive achievements and growth along with the EU 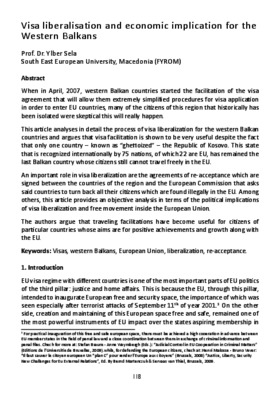 This paper was published in Epoka University.