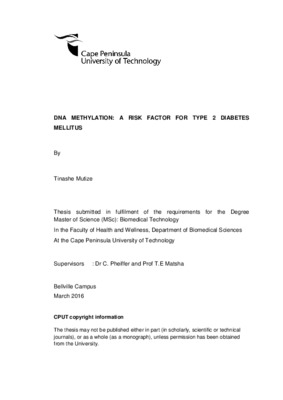 Thesis (MTech (Biomedical Technology))--Cape Peninsula University of Technology, 2016.The early detection of individuals who are at risk of developing type 2 diabetes mellitus (T2DM) would decrease the morbidity and mortality associated with this disease. DNA methylation, the most widely studied epigenetic mechanism, offers unique opportunities in this regard. Aberrant DNA methylation is associated with disease pathogenesis and is observed during the asymptomatic stage of disease. DNA methylation has therefore attracted increasing attention as a potential biomarker for identifying individuals who have an increased risk of developing T2DM. The identification of high risk biomarkers for T2DM could facilitate risk stratification and lifestyle interventions, which could ultimately lead to better ways to prevent, manage and control the T2DM epidemic that is rampant worldwide. The aim of the study was to investigate global DNA methylation as a potential risk factor for T2DM by studying the association between the global DNA methylation levels and hyperglycaemic states. A cross-sectional, quantitative study design, involving 564 individuals of mixed ancestry descent, residing in Bellville South, South Africa was used. Participants were classified as normal, pre-diabetic (impaired fasting glucose (IFG) and/or impaired glucose tolerance (IGT)) or diabetic (screen detected diabetic and known diabetics) according to WHO criteria of 1998. DNA was extracted from whole blood using the salt extraction method. The percentage global DNA methylation was measured by an enzyme-linked immunosorbent assay (ELISA). The association between global DNA methylation and hyperglycaemia, as well as other biochemical markers of T2DM was tested in a robust linear regression analysis adjusted for age, gender and smoking