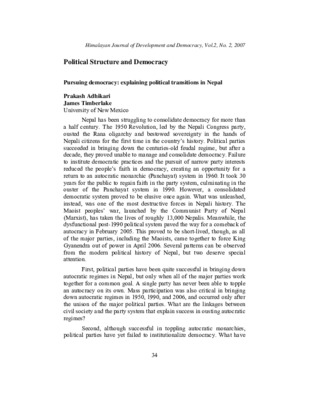 By Prakash Adhikari and James Timberlake
Get PDF (61 KB)

Several patterns can be observed from the modern political history of Nepal, but two deserve special attention. First, political parties have been quite successful in bringing down autocratic regimes in Nepal, but only when all of the major parties work together for a common goal. A single party has never been able to topple an autocracy on its own. Mass participation was also critical in bringing down autocratic regimes in 1950, 1990, and 2006, and occurred only after the unison of the major political parties. What are the linkages between civil society and the party system that explain success in ousting autocratic regimes? Second, although successful in toppling autocratic monarchies, political parties have yet failed to institutionalize democracy. What have been the critical variables missing from past experiments with democracy in Nepal? By offering some initial answers to these questions, this paper has three purposes. First, we draw upon the literature on social movements and protest cycles to explain the causes of mass participation in revolutionary movements. Second, we apply the insights of New Institutionalism to explain the failure of past experiments with democracy. Finally, we assess current prospects for democratic consolidation in Nepal