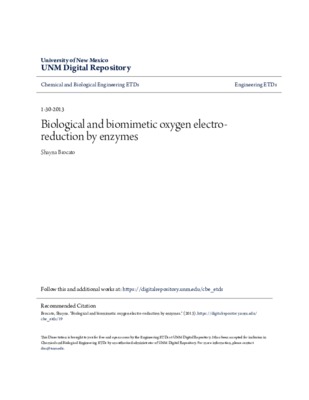 By Shayna Brocato
Get PDF (3 MB)

Enzyme catalysts are a viable alternative to the traditional platinum based catalysts for the complete oxidation of complex fuels. Efficient oxidation of multi-carbon compounds, selective catalytic activity eliminating the need for fuel purification, and high performance under mild temperature and pH conditions make enzyme catalysts appealing for applications in vivo, implantable, and in vitro, portable energy sources. The full catalytic potential of enzymes can only be obtained if the full energy potential of a biofuel, complete oxidation to CO2, is obtained; this requires multiple reactions, i.e. multiple enzymes or an enzyme cascade. The efficiency of enzyme cascades improves with quaternary protein structures which increase the local substrate concentrations, decrease the distance between enzyme active sites, and limit inhibitory molecules from reaching the active site of the enzymes. We have established a proof of concept that quaternary protein architectures can be achieved through DNA directed assemblies. The engineered enzyme conjugate of the small laccase enzyme from Streptomyces coelicolor (SLAC) and zinc finger DNA binding domain from Zif268 is demonstrated to bind double stranded DNA in a site specific manner while retaining enzymatic activity. The proof of principle for DNA templated enzyme immobilization demonstrates the feasibility of engineering quaternary protein structures for efficient oxidation of complex biofuels. Fuel cells most commonly utilize oxygen as the oxidant at the cathode because oxygen is a strong terminal electron acceptor that allows the extraction of large amounts of energy from the fuel with a non-toxic reduction product, H2O. Due to the chemical inertness of molecular oxygen under ambient conditions, a catalyst is required for its reduction. The oxygen reduction reaction (ORR) has traditionally been catalyzed by platinum group metal catalysts, but due to their limited supply/availability and high cost are gradually being replaced by enzyme and non-platinum group metal (non-PGM) catalysts. The SLAC enzyme is a member of the large multicopper oxidase (MCO) family of enzymes that perform oxygen reduction and share a similar 4-copper active site. MCO enzymes are commonly used at the cathode of biofuel cells to catalyze oxygen reduction despite the lack of understanding of the oxygen reduction direct electron transfer (DET) mechanism. The mechanism of oxygen reduction in the MCOs SLAC and bilirubin oxidase (BOD) were investigated using a rotating ring-disc electrode (RRDE). The DET mechanism in BOD was determined to be a four electron mechanism and in SLAC was determined to be a two electron mechanism. The structure-function relationship of the T1 copper active site in SLAC, investigated through mutating amino acid residues around the T1 site, showed that amino acid mutations T232F and M298F had the greatest detrimental effects and M198L and T232V had the most positive effects on current and half wave potential. The mechanistic analysis of the multicopper oxidases SLAC and BOD will allow for a deeper understanding of the commonly used ORR mechanism in enzymes. Non-PGM catalysts are developed based on microcycles and have been proposed for biomimetics of hemoglobin and cytochromes, oxygen reduction complexes. These biomimics for electrocatalysis need a cathode that operates at neutral pH, requiring an understanding of the ORR mechanism and necessitating a full pH study. The activity of the non-PGM catalyst, Fe-phenanthroline, was tested on an RRDE in electrolyte solutions with pHs ranging from 1 to 13.7. The Fe-phenanthroline ORR mechanism is determined to shift at pH 7 from an inner-Helmholtz plane (IHP) reaction in acidic media to a combination of IHP and outer-Helmholtz plane (OHP) reaction mechanisms in alkaline media as determined through the percent hydrogen peroxide detected at the ring, half-wave potential shift, kinetic current changes, and trends in the number of electrons transferred as calculated from Koutecky-Levich and charge/mass balance analysis. The pH study of Fe-phenanthroline provides a deeper understanding of how pH influences the mechanism and kinetics of oxygen reduction in non-PGM catalysts