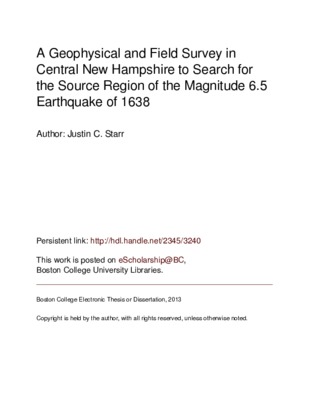 A Geophysical and Field Survey in Central New Hampshire to Search for the Source Region of the Magnitude 6.5 Earthquake of 1638

Thesis advisor: John E. EbelIn 1638, an earthquake with an estimated MLg of 6.5 ± 0.5 struck New England and adjacent southeastern Canada producing severe shaking in Boston, Massachusetts and Trois-Rivieres, Quebec. Previously published analyses of felt reports place the possible epicenter somewhere within a broad region including NY, NH, VT and ME. The possible source region had been further refined by the application of Omori's Law rate of aftershock decay combined with estimated rupture extent based on modern seismicity, which together suggest that a seismic event of MLg 6.5 ± 0.5 could have occurred in central New Hampshire in 1638. In order to more clearly define the possible active fault for this earthquake and determine its seismotectonic framework within central New Hampshire, three geophysical methods were used to analyze recent, digitally recorded seismic data. The three methods are a relative location analysis, computation of focal mechanisms and computation of focal depths based on fundamental mode Rayleigh waves. The combined results of the analyses are consistent with a thrust fault trending NNW - SSE and possibly dipping eastward in this postulated 1638 epicentral zone. Modern earthquakes in the postulated source area of the 1638 earthquake occur at focal depths of ~3 to 10 km with many of the events occurring below 5 km, suggesting, that this is the depth range of the 1638 rupture. Depending on the depth of the pre-Silurian basement of the Central Maine Terrane, the source of the MLg 6.5 ± 0.5 earthquake of 1638 may be a basement-involved thrust fault or a reactivated east-dipping thrust fault located between the nappes of the overlying Silurian-Devonian aged metasedimentary rocks. When the postulated fault plane is projected to the surface, portions of the Pemigewasset and Merrimack Rivers are found to flow within its surface expression, which suggests that the courses of these rivers may be fault controlled. A fourth research technique, a field survey, was undertaken to search for earthquake-induced liquefaction features along the Pemigewasset, Merrimack and Winnipesaukee Rivers as well as of the Suncook River Avulsion site. Several small strata-bound soft-sediment deformation structures were found during the survey. Although some of the features may be seismically induced, they may also have formed as the result of depositional processes and therefore cannot be attributed to the 1638 earthquake.Thesis (MS) — Boston College, 2013.Submitted to: Boston College. Graduate School of Arts and Sciences.Discipline: Earth and Environmental Sciences