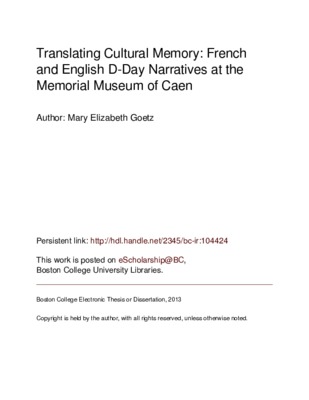 Thesis advisor: Joseph BreinesDuring my five-month stay with in Rennes, France in the fall of my junior year, my French host parents took me to Normandy to visit the memorial museum in Caen and the D-Day beaches. Véronique and Gildas considered this trip “obligatoire” for any American in France, a sentiment that has been matched by virtually everyone I have spoken with since, both French and American. My visit was, however, disrupted by an experience of linguistic confusion that could have significantly limited my ability to appropriate the information presented in the museum. The guiding texts found on the walls of the museum, translated from French to English, lacked so acutely the idiomatic feel of native English that they would have obscured my understanding of the text, had I not also been fluent in French and able to read the originals. What began as a tourist’s frustration is today the subject of a project that has carried me back to France for another two months as well as into both translation and museum theory. I have created here a critical study as well as a retranslation of a selection of these texts, proposed with no other aim than to explore the importance of linguistic accuracy, and the implications of inaccuracy in translation. This work is meant to represent the chronological process by which I explored the original translations and ultimately determined my final retranslations. As such, I have attempted to reflect the results of the different stages of my work in the division of my five chapters. The first chapter is an introduction to the museum: its history, purported aims, and layout. In discussing the museum, I consider some applications of Vivian Patraka’s museum and performance theories to this site, eventually exploring the connection between the importance of these texts within their physical and cultural space and the importance of their proper translation. To further delve into the subject of translation theory and its implications to my project, I will invoke the work of David Bellos, Walter Benjamin, and others. After having laid this theoretical groundwork for my project in conjunction with a background of the museum, my second chapter will present the original translations of the texts from the portion of the museum devoted to D-Day, supplemented by my annotations. These annotations are prefaced with an explanation of the methodology that I used while sifting through these original translations, which I hope will help to at least primarily explain the categories into which I have chosen to group the errors and problems that I found. The third chapter is a deeper analysis of each of these categories, beginning with the most significant or global and descending all the way down to the purely technical. Each section of this commentary will include examples of pertinent cases of the problem or error and a discussion of the stylistic or cultural issue present. After having identified all the present errors in my second chapter and analyzing them by category in my third, I will present in my fourth chapter a complete retranslation of these selected texts My fifth and final chapter will serve to conclude the process, stating any changes or modifications to my theoretical or procedural approach I find appropriate after having completed the project.Thesis (BA) — Boston College, 2013.Submitted to: Boston College. College of Arts and Sciences.Discipline: College Honors Program.Discipline: Romance Languages and Literatures Honors Program.Discipline: Romance Languages and Literatures