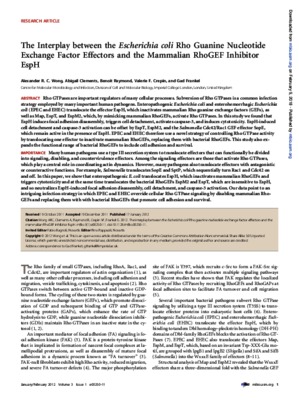 UNLABELLED: Rho GTPases are important regulators of many cellular processes. Subversion of Rho GTPases is a common infection strategy employed by many important human pathogens. Enteropathogenic Escherichia coli and enterohemorrhagic Escherichia coli (EPEC and EHEC) translocate the effector EspH, which inactivates mammalian Rho guanine exchange factors (GEFs), as well as Map, EspT, and EspM2, which, by mimicking mammalian RhoGEFs, activate Rho GTPases. In this study we found that EspH induces focal adhesion disassembly, triggers cell detachment, activates caspase-3, and induces cytotoxicity. EspH-induced cell detachment and caspase-3 activation can be offset by EspT, EspM2, and the Salmonella Cdc42/Rac1 GEF effector SopE, which remain active in the presence of EspH. EPEC and EHEC therefore use a novel strategy of controlling Rho GTPase activity by translocating one effector to inactivate mammalian RhoGEFs, replacing them with bacterial RhoGEFs. This study also expands the functional range of bacterial RhoGEFs to include cell adhesion and survival. IMPORTANCE: Many human pathogens use a type III secretion system to translocate effectors that can functionally be divided into signaling, disabling, and countervirulence effectors. Among the signaling effectors are those that activate Rho GTPases, which play a central role in coordinating actin dynamics. However, many pathogens also translocate effectors with antagonistic or counteractive functions. For example, Salmonella translocates SopE and SptP, which sequentially turn Rac1 and Cdc42 on and off. In this paper, we show that enteropathogenic E. coli translocates EspH, which inactivates mammalian RhoGEFs and triggers cytotoxicity and at the same time translocates the bacterial RhoGEFs EspM2 and EspT, which are insensitive to EspH, and so neutralizes EspH-induced focal adhesion disassembly, cell detachment, and caspase-3 activation. Our data point to an intriguing infection strategy in which EPEC and EHEC override cellular Rho GTPase signaling by disabling mammalian RhoGEFs and replacing them with with bacterial RhoGEFs that promote cell adhesion and survival