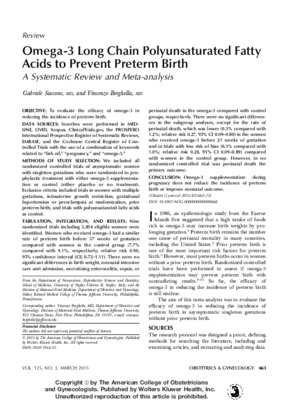 By Gabriele Saccone and Vincenzo Berghella
Get PDF (760 KB)

OBJECTIVE: To evaluate the efficacy of omega-3 in reducing the incidence of preterm birth. DATA SOURCES: Searches were performed in MEDLINE, OVID, Scopus, ClinicalTrials.gov, the PROSPERO International Prospective Register of Systematic Reviews, EMBASE, and the Cochrane Central Register of Controlled Trials with the use of a combination of keywords related to "fish oil," "pregnancy," and "omega-3." METHODS OF STUDY SELECTION: We included all randomized controlled trials of asymptomatic women with singleton gestations who were randomized to prophylactic treatment with either omega-3 supplementation or control (either placebo or no treatment). Exclusion criteria included trials in women with multiple gestations, intrauterine growth restriction, gestational hypertension or preeclampsia at randomization, prior preterm birth, and trials with polyunsaturated fatty acids as control. TABULATION, INTEGRATION, AND RESULTS: Nine randomized trials including 3,854 eligible women were identified. Women who received omega-3 had a similar rate of preterm birth before 37 weeks of gestation compared with women in the control group (7.7% compared with 9.1%, respectively; relative risk 0.90, 95% confidence interval [CI] 0.72-1.11). There were no significant differences in birth weight, neonatal intensive care unit admission, necrotizing enterocolitis, sepsis, or perinatal death in the omega-3 compared with control groups, respectively. There were no significant differences in the subgroup analyses, except for the rate of perinatal death, which was lower (0.3% compared with 1.2%; relative risk 0.27, 95% CI 0.09-0.80) in the women who received omega-3 before 21 weeks of gestation and in trials with low risk of bias (0.3% compared with 1.0%; relative risk 0.28, 95% CI 0.09-0.89) compared with women in the control group. However, in no randomized controlled trial was perinatal death the primary outcome. CONCLUSION: Omega-3 supplementation during pregnancy does not reduce the incidence of preterm birth or improve neonatal outcome