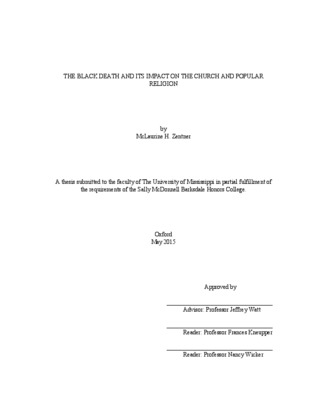 This thesis concerns the religious impact of the Black Death, the plague that devastated Europe during the middle of the fourteenth century. It explores the effect of the Black Death on the Catholic Church and the religious movements that emerged in response to it. The conclusions drawn here are based on the research of both primary and secondary sources. The Church played a significant role during the Middle Ages because religion was an important aspect of daily life for European Christians. When the Black Death struck Europe in 1347, the Church struggled to cope with the plague’s damaging consequences and its reputation suffered as a result. This thesis concludes that the Black Death contributed to the decline in the confidence and faith of the Christian laity towards the institution of the Church and its leadership. The scope of this paper focuses on the plague’s impact on the clergy, the rise of the flagellant movement, and the widespread Jewish persecutions that ensued in the wake of the plague. The Black Death was a significant event in the history of Western society with profound cultural and demographic consequences, and its impact on the Church and religion in medieval society justifies the study of this topic