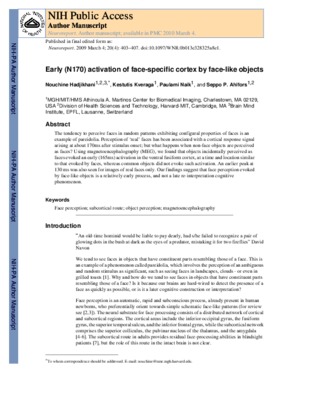 The tendency to perceive faces in random patterns exhibiting configural properties of faces is an example of pareidolia. Perception of 'real' faces has been associated with a cortical response signal arising at approximately 170 ms after stimulus onset, but what happens when nonface objects are perceived as faces? Using magnetoencephalography, we found that objects incidentally perceived as faces evoked an early (165 ms) activation in the ventral fusiform cortex, at a time and location similar to that evoked by faces, whereas common objects did not evoke such activation. An earlier peak at 130 ms was also seen for images of real faces only. Our findings suggest that face perception evoked by face-like objects is a relatively early process, and not a late reinterpretation cognitive phenomenon. NeuroReport 20:403-407 (C) 2009 Wolters Kluwer Health | Lippincott Williams & Wilkins