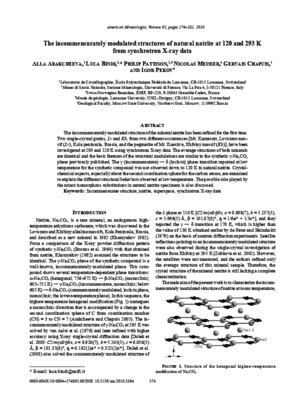 The incommensurately modulated structure of the mineral natrite has been refined for the first time. Two single-crystal grains, Lv and Kh, from two different occurrences [Mt. Karnasurt, Lovozero massif (Lv), Kola peninsula, Russia, and the pegmatite of Mt. Koashva, Khibiny massif (Kh)], have been investigated at 293 and 120 K using synchrotron X-ray data. The average structures of both minerals are identical and the basic features of the structural modulations are similar to the synthetic γ-Na2CO3 phase previously published. The γ (incommensurate) → δ (lock-in) phase transition reported at low temperature for the synthetic compound was not observed down to 120 K in natural natrite. Crystal-chemical aspects, especially about the second coordination sphere for the carbon atoms, are examined to explain the different structural behaviors observed at low temperature. The possible role played by the minor isomorphous substitutions in natural natrite specimens is also discussed